Although Mount Teide is the third largest volcano in the world (by height measured from the foot of the volcano on the seabed), Teide crater is quite small. It has a round (slight oval) shape and measures about 90 metres in diameter from east to west and about 100-110 metres from north-northwest to south-southeast. 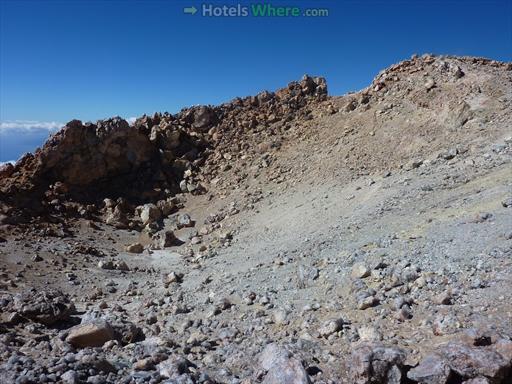 The picture above shows Teide crater, looking to the south-west.

The crater is quite shallow. It wouldn’t be extremely hard to walk through the middle of the crater from one side to the other, but that is not permitted – for both safety reasons and preservation of the precious nature. 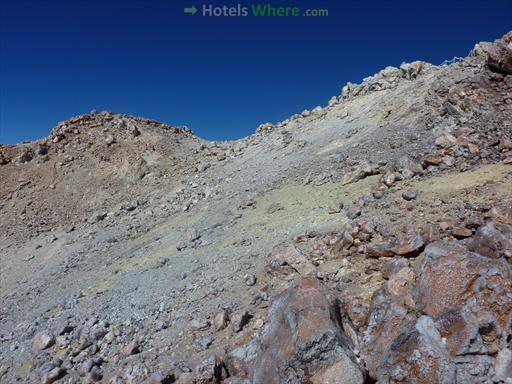 Teide crater, looking to the north-west.

Different sections of Teide crater edge have different altitude. It is the lowest in the south. The peak of Teide (the highest point around the edge of Teide crater, 3,718 metres above sea level) is situated in the north-east (the direction to La Orotava and Puerto de la Cruz). There is a path along the edge of the crater to the peak. 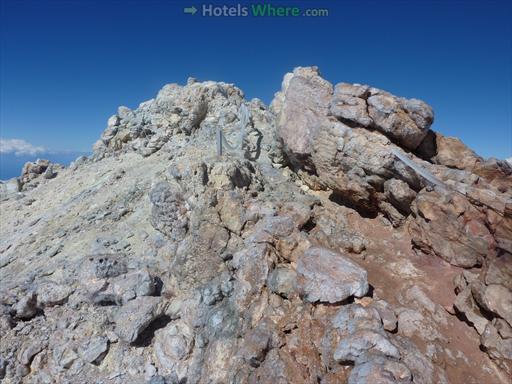 The peak of Teide with the path, north-eastern part of Teide crater. 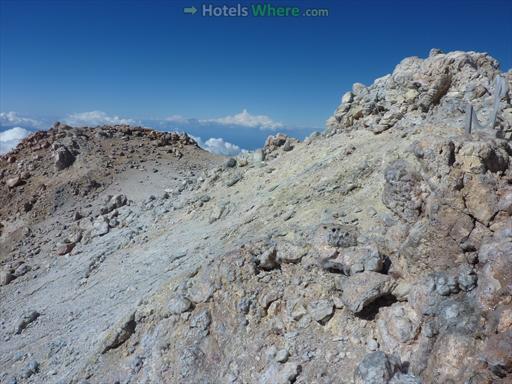 The northern part of Teide crater (the peak is on the right).

Teide crater is situated at the very top of Mount Teide (higher than the upper station of the cable car). The big (16×9 km) caldera of the previous Las Cañadas volcano (that occupies virtually the whole Teide National Park) is also sometimes inaccurately referred to as Teide crater. In fact, the whole Mount Teide rises from the middle of Las Cañadas caldera. 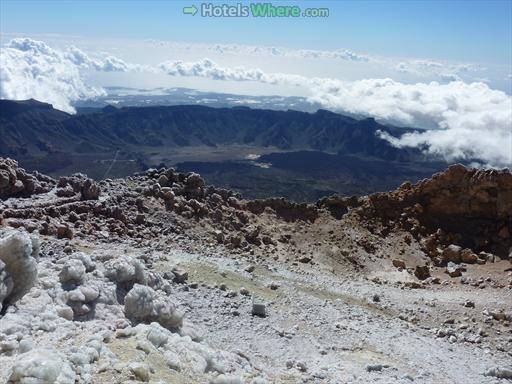 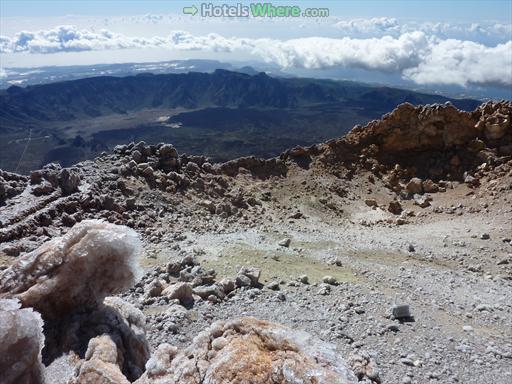 This is a similar picture, looking a bit to the west of the previous one. Approximately in the middle, behind the caldera edge, you can see the section of the coast near the popular resorts Los Cristianos, Las Americas, and Costa Adeje.

Teide is an active volcano, but all its recent eruptions occurred through different rifts on the sides and not directly through Teide crater. By recent we mean geologically recent – the last Teide eruption occurred in 1909.

Teide crater is a relatively peaceful place (except for the strong wind – it’s the highest point in the Atlantic Ocean after all). No strong volcanic activity is directly visible to an amateur eye (definitely no boiling lava), but you can smell the sulphur a bit and you can see many places (pieces of rock of various colours) where some of the gases are probably coming from.

There is only one path to the peak and the crater of Teide. It starts next to the upper station of Teide Cable Car. You need a permit to enter this path – it is free, but you must register in advance (the number of people who can go the the top is limited in order to protect the special environment). 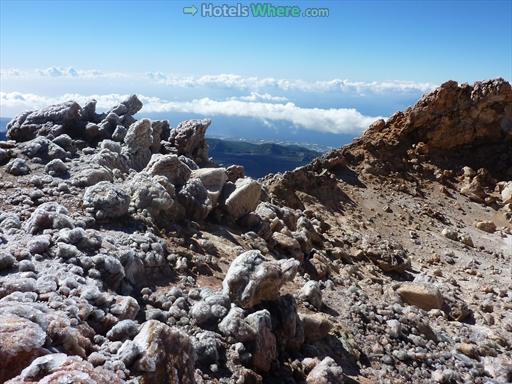 This is where you first enter Teide crater (the south-southeast edge of the crater). 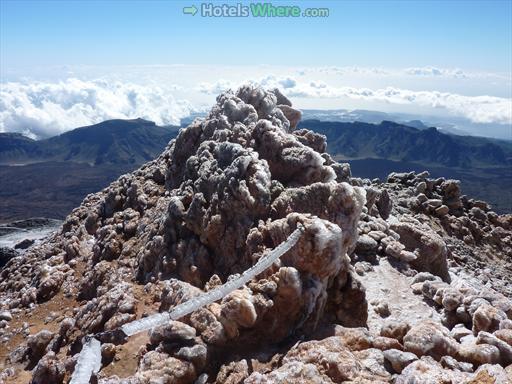 The path along the eastern edge of Teide crater. There are chains for support, but they may be covered with ice (this picture is from mid November). 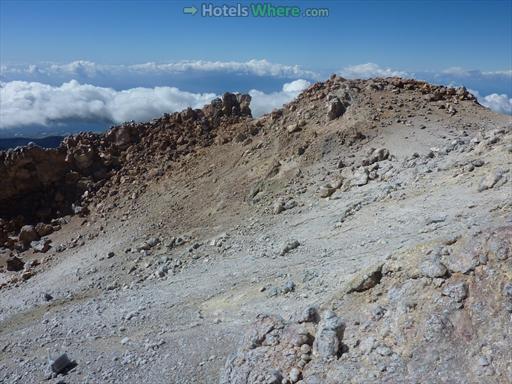 Overlooking Teide crater from the path to the west. 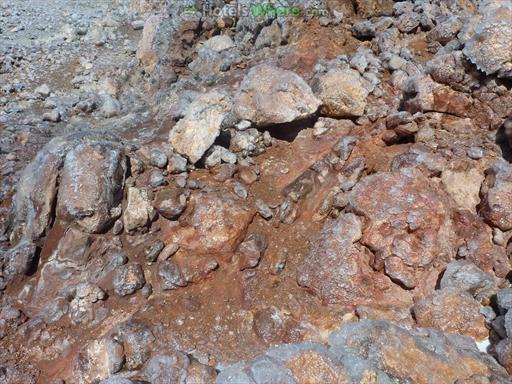 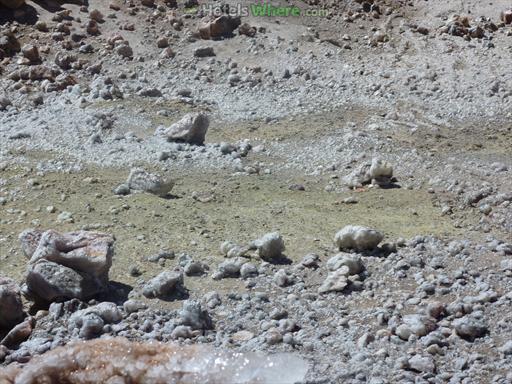 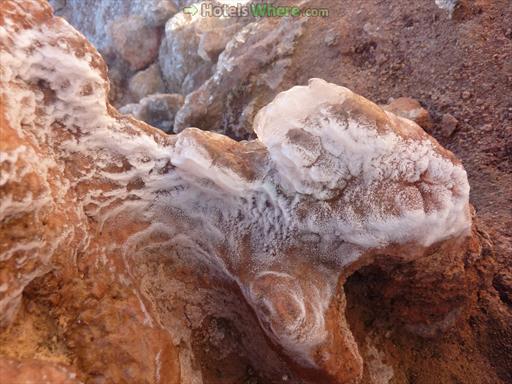