The following are aerial photos of Penang which I took on two flights. One was departing from Penang Airport bound to Kuala Lumpur – these photos are from relatively low altitude, with many details visible. The other flight was from London to KL, flying over Penang at high altitude, so you can see the whole island, but the quality is not that good.

Here you can see more information about where to stay in Penang. 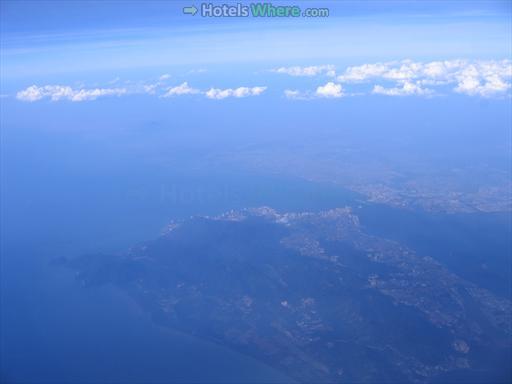 Penang Island as a whole. Georgetown (the capital) is in the north-east (the top of the island on the photo). 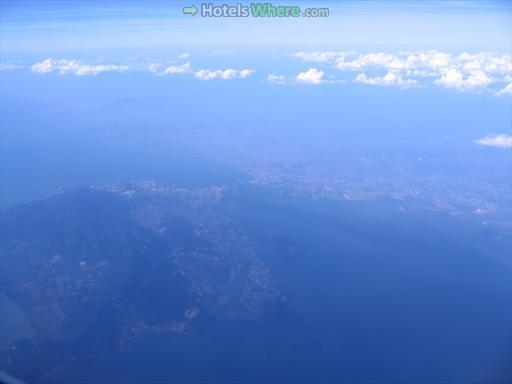 This is Penang (on the left) with the Selatan Strait, also known as Penang Strait, which separates the island from the Malay Peninsula (on the right). 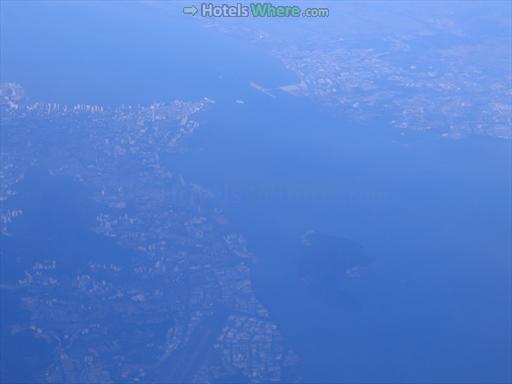 This photo is zoomed. Penang on the left, mainland on the right. In the north-eastern tip of the island you can see Georgetown. You may even recognize the KOMTAR skyscraper. Across the strait from Georgetown there is Butterworth. The darker strip at the bottom of the picture is the runway of Penang Airport. You can also recognize Jerejak Island, which is in the Selatan Strait close to Penang.

The Penang Bridge is not much visible on this photo (it will be on the lower altitude photos below). If you are familiar with Penang, you probably know where to expect the bridge (it is not in the narrowest point of the strait, which is off Georgetown in the north, but just slightly north of Jerejak Island).

Taking Off from Penang Airport

I was sitting on the left side. The aircraft took off to the south-west and immediately turned sharply to the east. All photos are looking to the east or north. 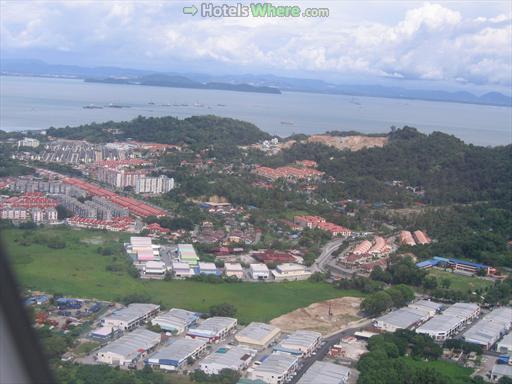 Just after takeoff – houses in the south-eastern part of Penang between the airport and Selatan Strait. 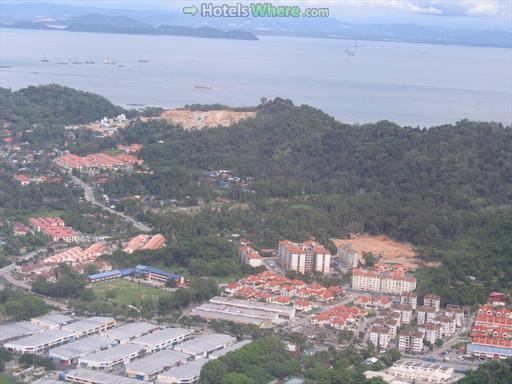 The land on the other side of the strait is the Malay Peninsula. 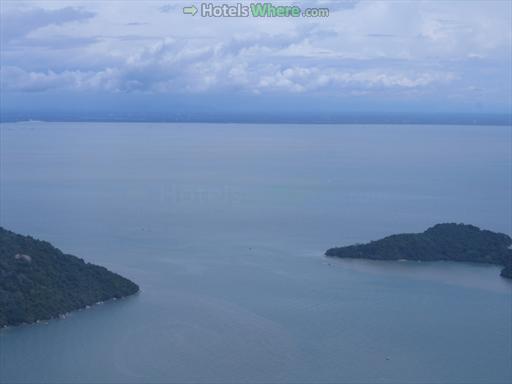 The land on the left side is the south-eastern tip of Penang. The one on the right is Pulau Rimau, a small island off Penang. 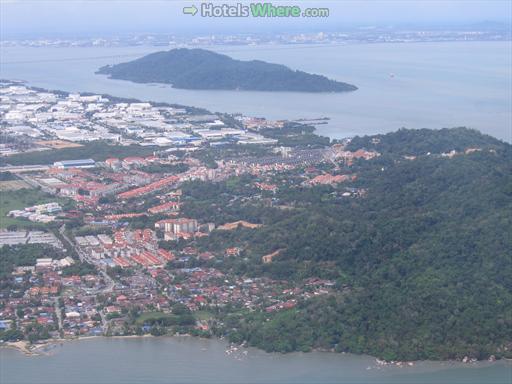 This is the south-eastern part of Penang and behind it Jerejak Island. You may also recognize the Penang Bridge (a dark line across the strait just behind Jerejak). 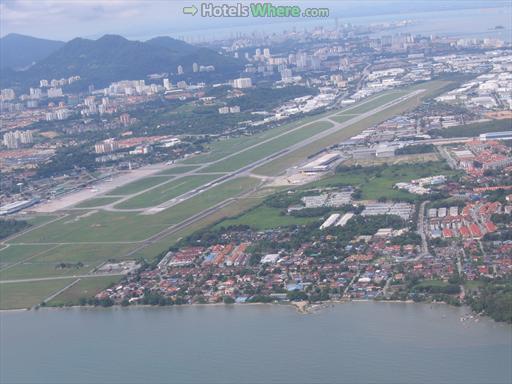 As the plane turned left sharply, I had a wonderful view of Penang Airport. Behind the airport there is Bayan Lepas and behind it in a distance you can see Georgetown. 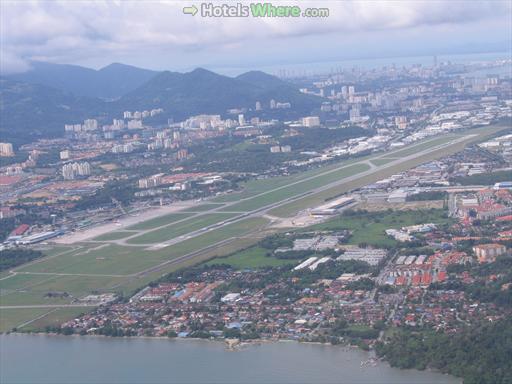 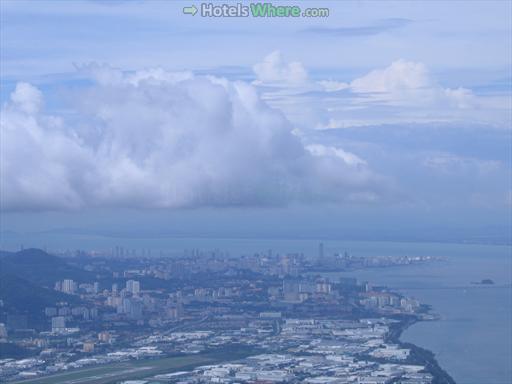 The most detailed photo of the east coast I could take. In the bottom left corner there is still the (northeastern) end of the runway. The houses in front are all parts of Bayan Lepas. In the background there is Georgetown with the characteristic KOMTAR building. About halfway between the two cities you can see the start of Penang Bridge. If you have trouble finding the bridge, see the two small islets (dark spot on the very right) – the bridge goes just in front of (below) them. 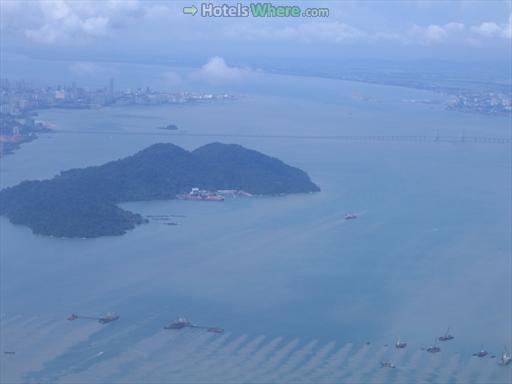 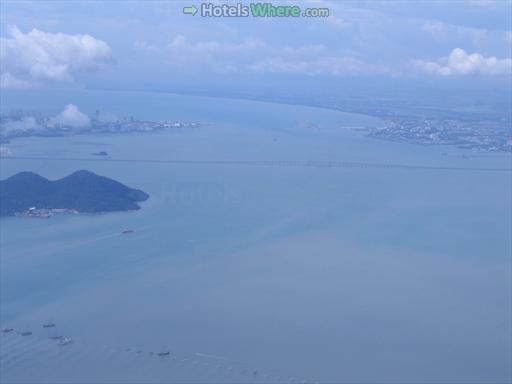 Penang Bridge, Georgetown (left) and Butterworth (right). Total length of the bridge is 13.5 km, but only 8.4 km is over the water. 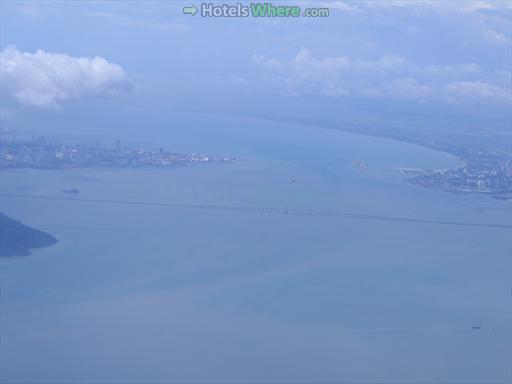 The bridge could have been much shorter if built directly between Georgetown and Butterworth (the narrowest point of the strait is only 2-3 km), but I’m sure that are good reasons for its route (probably not wanting to take the traffic through the city centres, but I’m not an expert). The bridge was opened for traffic in 1985.

A second bridge, which is under construction (not visible on any of the photos), will connect the Malay Peninsula with the south-eastern end of Penang. It will be 24 km long, with 16.9 km over the water.