Big waves are not uncommon in Tenerife – a popular surfing destination in the Atlantic. Occasionally the waves on Tenerife are too big to surf. They look especially magnificent near coastal towns and villages. This series of 12 pictures shows giant waves that hit Puerto de la Cruz (the most popular tourist town on the north coast of Tenerife) on the weekend of 9-10 October 2010. 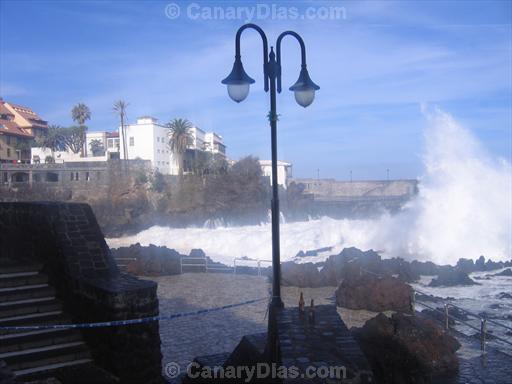 While tourists (and I) were taking pictures of waves most of us have never seen before, the police gradually closed all areas near the sea, including all beaches. However, some locals said that they have seen even bigger waves in Puerto in the past. 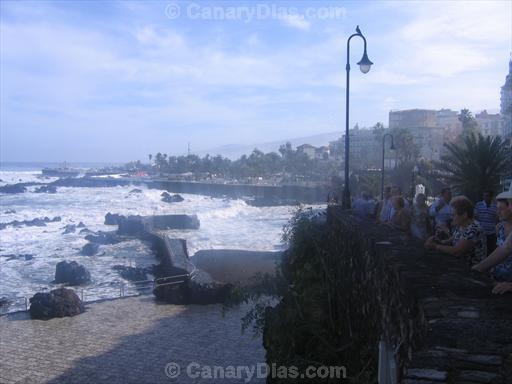 This (above) is the central area of Puerto de la Cruz tourism: Paseo San Telmo, halfway between the main square Plaza del Charco and the hotel district near Playa Martianez (you can see Lago Martianez in the background). The long pier in the middle of the picture is normally used by people as access to the water. Bathing is possible here at Paseo San Telmo, with the cliffs protecting people from waves. Not today – the police have closed the area due to strong waves. Really big waves, as you’ll see in a moment. 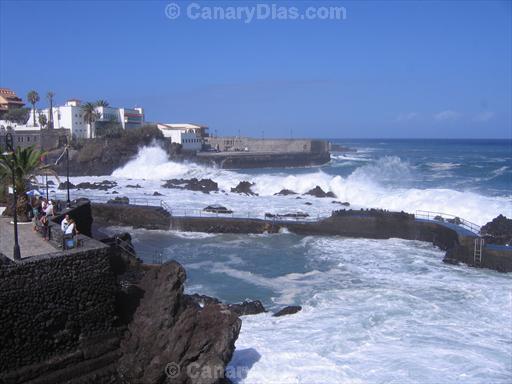 Saturday 9 October 2010. Can you see the walled area in front of the white house at the top centre of the picture? That wall is where the waves first hit when they come. Can you see the small dots in front of the wall, near the white house (two dark dots and one white)? Those are cars. Yes, the wall is quite big. But big waves were yet to come on Sunday, as you will see. 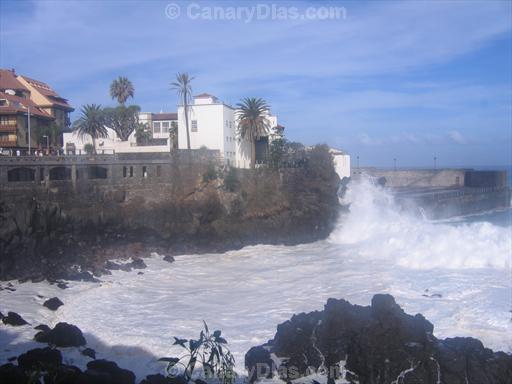 Sunday 10 October 2010. Additional areas near the water were closed by the local police. The cars are no longer in front of the white house. That was a smart move, as you will see. The “wave” wall is on the right now. 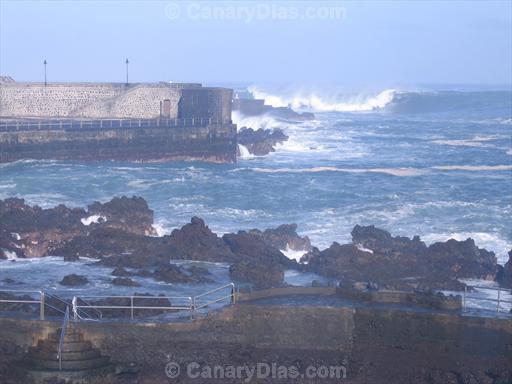 A massive wave is approaching town from the Atlantic. The stairs at the bottom of the picture are those of the pier used for access to bathing. Emergency area on this day, access forbidden. 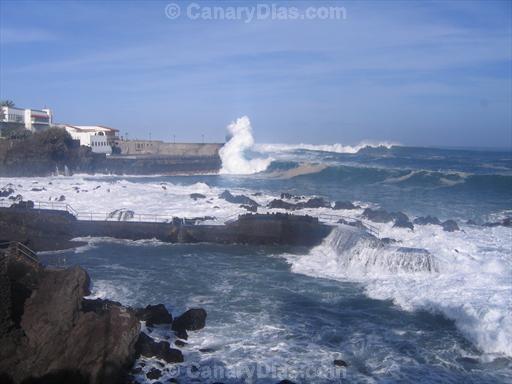 The bathing pier is getting splashed by water with every new wave. An elderly German man standing next to me told me that he had taken vacations in Puerto for 40 years and hadn’t seen waves like this before (though a few locals told me they had). 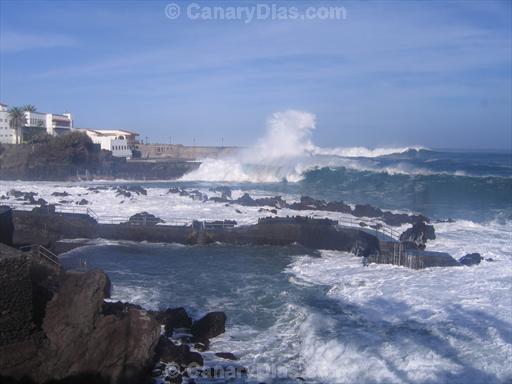 The next word the German said after a short break was… tsunami. These actually aren’t tsunamis. These are caused by wind in the Atlantic like normal waves. But the biggest wave is yet to come… 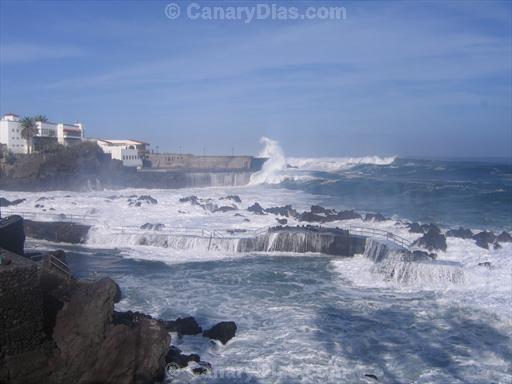 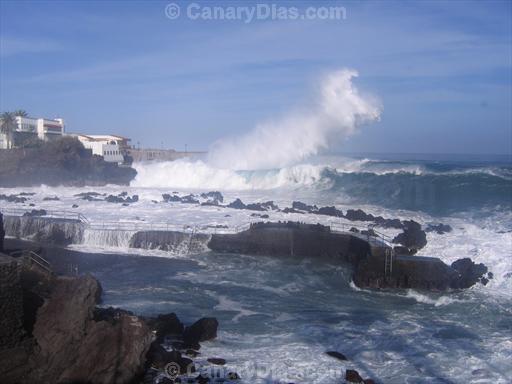 It’s amazing how high water can get on its own force. This is not a man-made jet like in Geneva, this is nature. On this weekend strong waves have become the top tourist attraction in Puerto. The police have closed all the beaches anyway and the sea-water pool Lago Martianez has delayed its opening because they first had to fix minor damage caused by waves over the night (nothing serious, mostly displaced sunbeds). 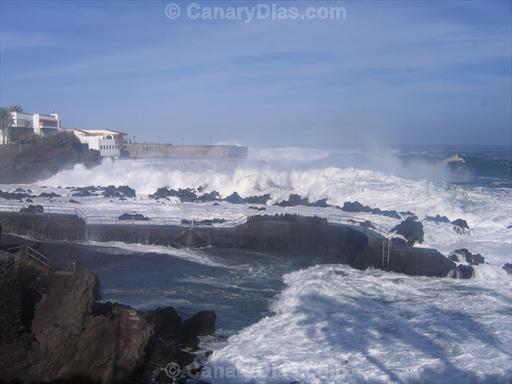 I wouldn’t want to be on that pier down there now. A while before taking this picture I talked to a local who within 5 minutes managed to tell me 3 different stories about people who lost their lives due to strong waves in Puerto de la Cruz. Our communication was somehow limited by my poor Spanish and his poor English, but you always understand when someone makes the gesture of cutting his throat and says “finito”. 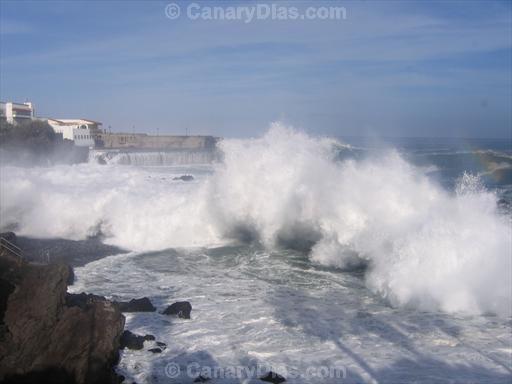 Explosion. Sounds like a train. Or an airplane? I was wondering whether the pier would survive this impact. It did, only one piece of fence was severely tilted, but I’m not sure when that happened. 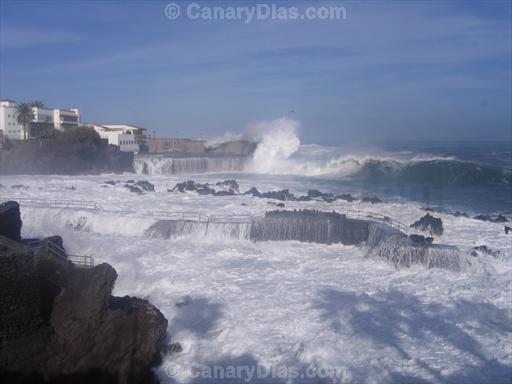